SteelSeries Rival 650 Review – Does This Rival The Best?

In this SteelSeries Rival 650 review, we’re putting one of the Danish tech company’s finest wireless gaming mice under the microscope, as it promises to be a premium entry with top-notch performance, tons of customizability, and a build that will keep up with years of intense gaming.

It may not have the insane DPI of the Logitech G502 LIGHTSPEED or as many buttons, but when it comes to performance and comfort, the SteelSeries Rival 650 doesn’t falter. Gamers in the market for an excellent all-around wireless gaming mouse with some gorgeous RGB lighting thrown in should definitely give it a look.

It’s got some stiff competition, however, as it lands in the same playground as some of the industry’s best, including one of our personal favourites – the Logitech G502 LIGHTSPEED. Does it bring enough to the table to warrant a buy? Or should you just stick to one of the fantastic offerings of its many rivals? Let’s dive in and find out.

If you can’t spare the time to read through the entire review, just click any of the links below and we’ll take you right to that section.

What is the SteelSeries Rival 650?

If you head on over to SteelSeries’ official website and check out their list of gaming mice, you’ll find that most of them sit squarely in the low-to-mid-range department. Their premium seat is reserved for the SteelSeries Rival 650, their top-of-the-line wireless peripheral that sports the tech company’s best sensor, a healthy amount of buttons, and some customizable weights.

It’s also got a great look that’s heavily gamer-oriented but still easy on the eyes. As expected of premium entries, the Rival 650 also comes with the heftiest price tag of any SteelSeries mouse, making it a fair bit more expensive than the excellent Corsair Dark Core RGB Pro SE, but not quite as pricey as the Logitech G502 LIGHTSPEED. 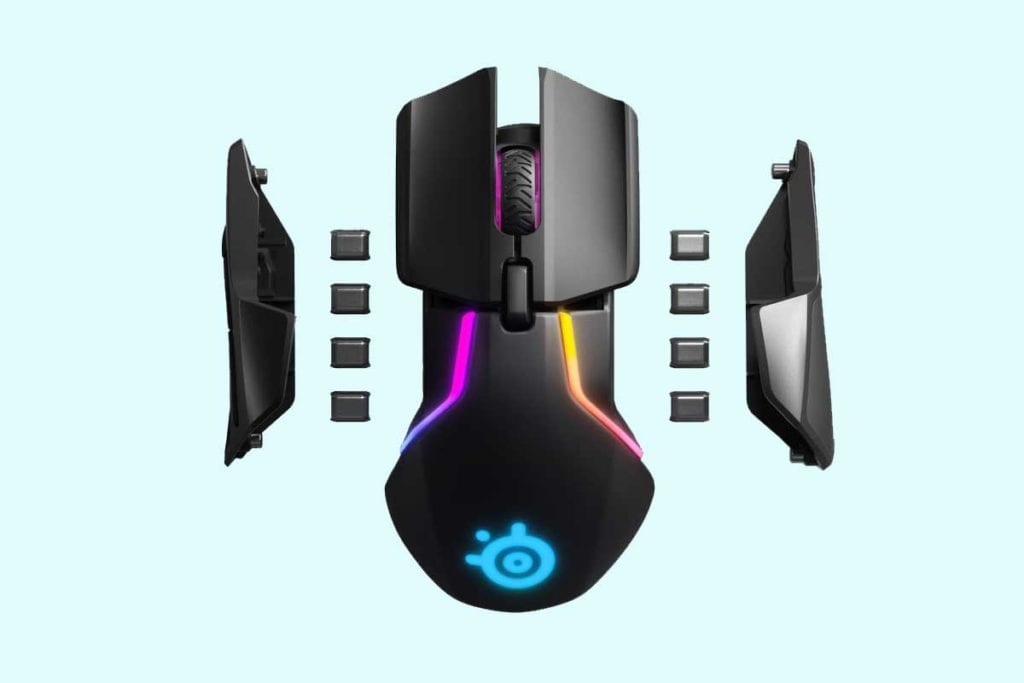 The Rival 650 utilizes SteelSeries’ signature TrueMove 3 optical sensor that offers 12,000 DPI and an excellent 1000Hz polling rate. It may not match up to Logitech’s HERO 25K sensor or the Razer Focus+ in terms of sensitivity, but its tracking capabilities are among the best in the business.

It connects to PCs solely via its wireless USB receiver, though it does come with a USB cable which can be used to charge the peripheral while in use. Unfortunately, it’s a cheap-looking rubber cable with lots of kinks, so you can expect it to be quite cumbersome especially while gaming.

This mouse comes with a total of 7 buttons, all of which are programmable including the scroll wheel up and down inputs. While that should be more than enough for most MOBA and FPS fanatics, hardcore MMO enthusiasts may be left wanting.

Compared to the Logitech G502 LIGHTSPEED’s 48-hour battery life (with RGB switched on), the Rival 650’s 24-hour longevity is just okay. It does, however, promise a fast-charging capability that supposedly gives you 10 hours on a 15-minute charge which is pretty impressive.

The Rival 650’s companion app – the SteelSeries Engine 3 – is just plain awesome, offering a great interface, all the customization options you could ask for, and compatibility for both Windows and macOS. The mouse also comes with onboard memory, so your personal settings are carried over to whatever device you’re using.

Comfort is something the Rival 650 does exceedingly well, thanks to its ergonomic slanted design, supple grips on either side, and soft texture all around. It’s a right-handed mouse, though that should be obvious on account of the extra buttons along its left side.

It’s quite the bulky piece of hardware, so gamers with smaller hands may have a tough time gripping the mouse properly and reaching all the buttons comfortably. Users with larger mitts, on the other hand, will feel right at home. On the plus side, it’s a well-built gaming mouse that you can expect to take quite a beating for years down the road.

Palm grips work best with the Rival 650 due to its shape and size, though if your hands are big enough you should be able to utilize a claw grip without much issue. It comes with 8 4-gram weights that you can tack on to the mouse for some added poundage, but it’s actually a bit heavier than most would like right out of the box.

Looks-wise, I can’t help but compare it to the G502 LIGHTSPEED with its angular primary buttons and robotic design. It’s a lot more symmetrical, though, and comes with a couple of tasteful RGB lighting strips that start at the middle and wrap around the bottom. Overall, it’s a handsome look that edgier gamers and RGB fans are sure to love.

Setting up the SteelSeries Rival 650 is nice and painless and entails little more than just plugging in the wireless USB receiver and letting your OS do its thing. Customizing the mouse options is a breeze thanks to the wonderful SteelSeries Engine 3 software that’ll have you fine-tuning your mouse sensitivity and picking out your RGB colours in no time at all.

As previously mentioned, the TrueMove 3 sensor doesn’t offer the highest sensitivity at 12,000 DPI, but to be honest, not a whole lot of people utilize those crazy-high sensitivity options anyways. Instead, SteelSeries opted to focus on precision tracking and remarkably low click latency for a silky-smooth gaming experience.

The mouse’s controls are all reasonably well-placed and feel satisfying to click. There are 3 extra buttons on its left side, though the furthermost one may be hard to reach for people with smaller hands.

I took it out for a test drive with a couple of League of Legends matches and landing skill-shot spells and navigating the map never felt simpler. It even made pinging my teammates on the mini-map that much easier. Of course, at the end of the day, I was still a Gold-tier player, but boy did I feel like I belonged in the higher ranks.

The Rival 650 entered the scene facing some stiff competition but manages to impressively hold its own behind its exceptional performance, attractive design, and comfortable yet rugged build.

It doesn’t have some of the bells and whistles that a few of its rivals are sporting and its large size might be unwieldy for some gamers, but if you’re looking for a wireless gaming mouse that just feels amazing to use and consistently performs at a high level, the SteelSeries Rival 650 doesn’t disappoint.